“We are lucky to have with us a well known Film Maker National award-winning actor and motivational speaker, Ashish Vidyarthi, creates learning environments for the life skill development and workplace wellbeing of corporate professionals, entrepreneurs and individuals,” introduced Dr. Sandeep Marwah President of Asian Education Group.

“He is an Indian Film Actor & Television Actor who is known for his work in Hindi, Tamil, Telugu, Kannada, Malayalam, Odia, Bengali, Marathi and English movies,” added Dr.Marwah.

“We know every thing but still we need someone to remind us and explain us the same thing in our manner and style. I am here to see that students of Cinema at AAFT should do well in life and should create a wonderful name for themselves, their family and the institution,” said Ashish Vidyarthi before talking to students at length.

Ramesh Meer On The Board of AAFT School of Animation

Tue Aug 27 , 2019
Noida: AAFT Joined hands with renowned Animator of India Ramesh Meer founder CEO FX Factory during his recent visit to AAFT Noida at Marwah Studios, Noida Film City. “Ramesh Meer is the Chief CreativeDirector & CEO of The FX Factory, who has an experience of 50 years in the creation […] 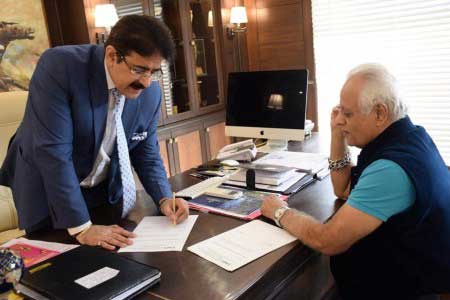