Noida: An Indian film institute AAFT presented scholarship of a short-term course to the student of Azerbaijan during the inauguration of 7th Global Festival of Journalism Noida 2019.

“We are honored to present the scholarship of Asian Academy of Film And Television to Ambassador of Azerbaijan to handover to the deserving student from Azerbaijan on this auspicious day of International Day of Journalism to have better relation in media with their country,” said Sandeep Marwah President of Marwah Studios.

“Indo Azerbaijan Film And Cultural Forum has been working in promoting and developing relation between two countries and so far has done commendable jobs   to do so. This is an another gesture and we accept it with grace,” said Ashraf Shikhaliyev Ambassador of Azerbaijan to India.

Many dignities and media students attended the event from different countries of the world. 12th February is celebrated as the International Day of Journalism.

Tue Feb 19 , 2019
Noida: The first ever festivals of Journalism of Asia and second in the World created a wonderful opportunity for journalists from all over India and abroad a powerful cultural exchange. International Journalism Centre and International Chamber of Media And Entertainment Industry in association with AAFT- Asian Academy of Film And […] 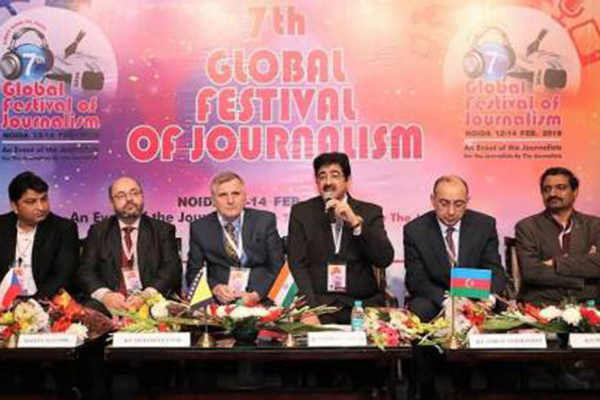