Noida: â€œ I am here to take blessings from Sandeep Marwah our mentor who has created enormous stars in India and many other countries including Pakistan. I have always been influenced by the creative ability of Sandeep Marwah and his international reach,â€ said Farida Malik a Pakistani born singer now settled in USA on her visit to her Alma Matter- AAFT at Noida Film City.

Farida Malik has grown as a renowned singer in last so many years. Now she is presenting her 16 shows in Nepal and then followed by shows in India. Asian Academy of Film And Television is proud of its alumna.

â€œIt is always been pleasure to receive alumni of Asian Academy of Film And Television. Farida Malik has done commendably well and we will support her in her endeavorâ€ said Sandeep Marwah President of Marwah Studios.

International Chamber of Media And Entertainment Industry, Indo Nepal Film And Cultural Forum and AAFT will support her shows in India and Nepal.

Tue May 24 , 2016
New Delhi: â€œGod Father of many students and trainer to many media professionals Sandeep Marwah is a Global Media Guru. His reach is in more than 100 countries of the World. He has already been titled as Global Cultural Minister and Global Peace Ambassador,â€ said S. S. Dogra read the […] 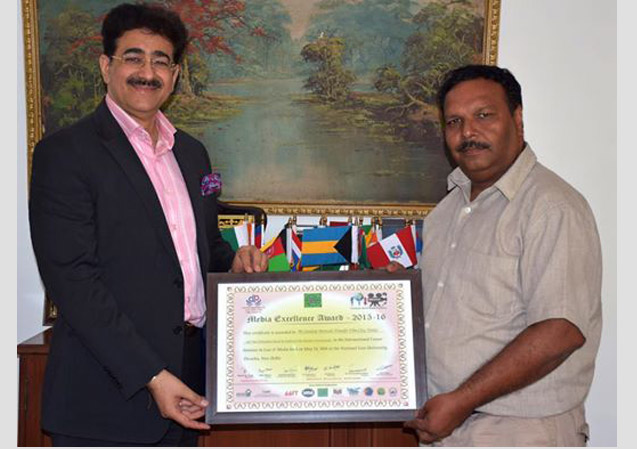