New Delhi: AAFT –Asian Academy of Film And Television congratulate to Boney Kapoor for receiving National Award from the President of India H.E.Shri Ram Nath Kovind at the most prestigious hall of India at Vigyan Bhawan.

The award of Sridevi Kapoor was presented over to Boney Kapoor for the title Best Actress for the feature film MOM. Boney Kapoor with his two daughters Jhanvi and Khushi received the Ntional Award.

“We are proud of Late Sridevi for her deep involvement in promoting cinema. She was the only actress to perform in 300 films in 6 languages. Her films are collection items for film lovers and training material for new comers,” said Sandeep Marwah invited as a special guest at Vigyan Bhawan.

The Minister of Information And Broadcasting, Government of India Col. Rajyavardhan Singh Rathore, Member Rajya Sabha Amar Singh also congratulated Boney Kapoor. Sridevi was on the board of AAFT and had contributed a lot to the cinema studies.

Sandeep Marwah Special Guest at Festival of Films From Uzbekistan

Wed May 30 , 2018
New Delhi: “It is a wonderful opportunity for me to meet some of the most important people from Uzbekistan who matters when it comes to film business. Festivals are the best way to project your culture, I have always believed that Films are the best ambassador of culture,” said Sandeep […] 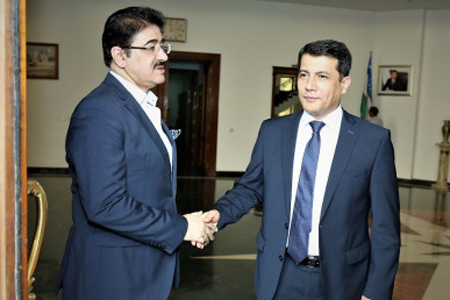