AAFT and Budapest Film Academy now will work together in the promotion of cinema and other programs like students exchange, faculty exchange, film festivals of students film and visit to the institutions informed Marwah at a meet at Hotel Marriott River Side during his visit to Budapest in Hungary.

â€œWe know each other well and have visited to each others institutions. Jeno Hodi was in India three years before at Global Film Festival and it was decided to work together,â€ said Sandeep Marwah

â€œWe are already working with Hollywood and now keen in developing more relations with India, the largest film producing country in the World. AAFT and Marwah Studios are the best platform to start with,â€ added Jeno Hodi.

Sandeep Marwah also the President of ICMEI- International Chamber of Media And Entertainment Industry invited Jeno Hodi to be guest of honor in the 10thÂ Global Film Festival Noida 2017.

Tue Sep 12 , 2017
Budapest: â€œI extend my heartiest congratulations to Sandeep Marwah President Marwah Studios for receiving the most prestigious award from House of Commons at British Parliament. It is a pleasure to see him in Hungary,â€ said H.E. Rahul Chhabra Indian Ambassador to Hungary and Bosnia and Herzegovina at Budapest in a […] 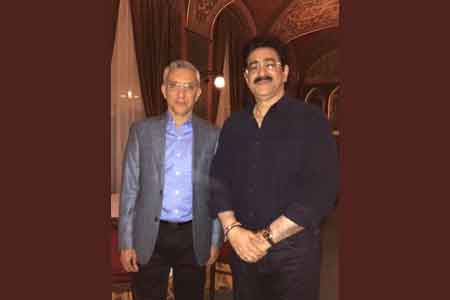