Noida: A Well-known film TV and media person Dr. Sandeep Marwah has been recently honored at Cannes during 72nd Cannes International Film Festival at France for his extra ordinary contribution to media and entertainment Industry World Wide. This was the narration of his visit to Cannes.

“It was a great pleasure to represent your country solely where 60,000 people from 200 countries of the World from the same field of media and entertainment were present and come back home with hands full of love, success and prestige,” said Dr. Sandeep Marwah six times World Record Holder in media while talking to 200 media professionals on his return to AAFT at Marwah Studios.

Life Time Achievement Award was bestowed upon Dr. Marwah during 72ndCannes International Film Festival 2019. That was not enough as he was also nominated the Vice President of the Jury meant for first International Mobile  Cinema Presentation at Cannes. It was also a great honor for the country as he was Co- President with Global Short Films Awards Cannes this time.

Not many Indian have been lucky enough to be in Cannes with so much of importance and busy schedules. More than 50 meetings were arranged with Sandeep Marwah   with different filmmakers of different countries during his stay at Hotel Intercontinental Carlton at Cannes.

Tue Jun 4 , 2019
Noida: Global Day of Parents was celebrated at Asian Academy of Film And Television at Marwah Studios, Noida Film City to promote the traditions and culture of India. “Parental love is the only love that is truly selfless, unconditional and forgiving. We never know the love of a parent till […] 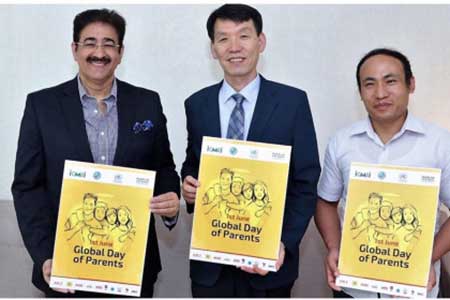