Noida: â€œWe have come now a long way. Hard work always pays in life. AAFT has created enormous records to prove its international existence. Today we are marching towards a new level, soon will be celebrating centuryâ€ said Associate Dean of AAFT initiating the formal inauguration of 91st Batch of trainees.

â€œWhat a pleasure to be back again. My film â€˜Buddha In a Traffic Jamâ€™ was earlier screened during Global Film Festival and we both, Pallavi Joshi and me were awarded Cinema Excellence Award during the festival. I would love to have all time association with AAFT,â€ said Vivek Agnihotri renowned film writer director from Mumbai while lighting the lamp.

Sudhir Tandon former DDG of Doordarshan and President Osian Film Festival motivated the students. He said the industry is growing and it needs educated and trained personals. You will have lot of value once you know your job and have enough knowledge to face the world.

Satish Anand Dean Acting paid vote of thanks. Sandeep Marwah President Marwah Studios extended his heartiest congratulations to all the young aspirants on joining AAFT and on the inauguration of 91st Batch.

Wed Apr 27 , 2016
Noida: More than 35 delegates from 23 countries of the World gave standing ovation to the legend in the field of films, television, media, art and culture promotion Sandeep Marwah who has created enormous world records and proved an asset in the field of art promotion in the World. The […] 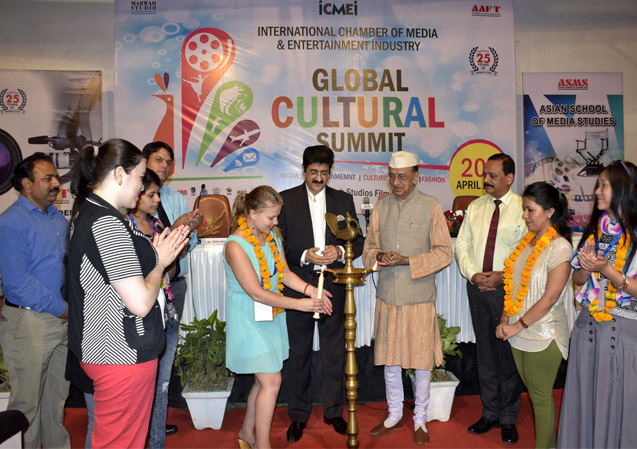