â€œWhat a unique and different kind of festival. I am amazed by the energy in this campus when it comes to promotion of films, art and culture business is concernedâ€ said H.E. Jaime Nualart Ambassador of Mexico on the inauguration of 8th International Festival of Cellphone Cinema at Noida Film City.

â€œSandeep Marwah efforts to establish film city in the North of India has brought colors to the whole nation. I would like to be the part of more activities of Marwah Studiosâ€ expressed Rekha Rani Social Worker & Municipal Councilor.

â€œPromoting other arts like Tarrot reading, paintings and photography exhibition has broadened the size of the festivalâ€ said Chandani renowned Tarror Diviner

â€œWe have grown in 8 years. This time we have received more than 600 entries from all over the Worldâ€ added Sandeep Marwah President of AAFT. Few films shot on mobile were also screened.

Later Sandeep Marwah honored H.E. Jaime Lunalart and other guest with the life membership of International Film And Television Club.

Wed Jan 6 , 2016
Bringing Love, Peace and Unity to the nation through different forum and organizations has reminded me of Lala Lajpat Rai. Sandeep Marwah of World Peace Development And Research Foundation is on the same linesâ€ said Swami Agnivesh the great Scholar and a former Politician during his visit to Noida Film […] 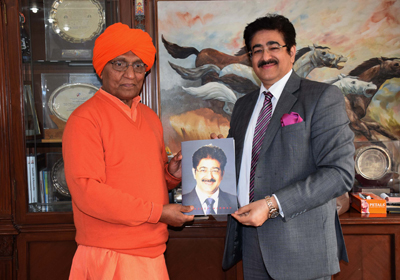