A unique film festival of the films made and shot by cellphone are the entry to International Festival of Cellphone Cinema now declared its 8th edition to take place in the month of January 2015 at Noida Film City.

â€œWe are again excited with the coming of 8th IFCC. The film lovers across the World has been asked to submit their films and still photographs as entry to the festivalâ€ said Sandeep Marwah President of the festival.

The festival has three categories including still photographs, a film up to 3 minutes, an ENG or a music video up to three minutes. The participants can be any one and everyone who has used mobile phone for clicking picture or shot film.The entries are welcomed till 20th January, 2015.

Fri Jan 8 , 2016
World Peace Development And Research Foundation has created a wonderful â€˜niche for itself. More than 100 countries are appreciating our gesture of bringing awareness towards humanity,â€ said Sandeep Marwah President of WPDRF ar Marwah Studio. â€œWe have also involved the religious and spiritual leaders and masters of numerology, palmistry, astrology […] 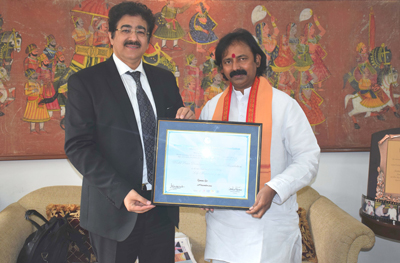