Noida: The Asian Academy of Film &Television celebrated a convocation ceremony for the students of 87th batch on Monday, July 6th, 2015. The ceremony was held at Marwah Studio.

A total of 84 students were hooded during the ceremony. All students across the divisions participated in the ceremony, at which Dean of AAFT conferred degrees to candidates and wished for their successful career. Several students received special recognition for attaining highest grades.

Addressing the gathering, AAFT dean said, that it is a proud moment for the teaching faculty that its students were on the threshold of beginning a new life. Mohd. Saleem Saifi, a passout of AAFT was present as a Guest of Honor. He had a successful stint with Aajtak as an anchor and now owns a Studio called Big Studio. Rajinder Singh, a Senior Video Journalist with CNBC and alumni of AAFT was also present as a guest of honor.

The students put out their sentiments, thanked their teachers and acknowledged that they owed their career and success to their mentors at AAFT.

â€œI extend my best wishes to the whole batch and pray for their success in film, television and media industryâ€ a note was read sent by Sandeep Marwah President Marwah Studios from London who was on the promotional tour to UK.

Sat Jan 9 , 2016
London: On the completion of 25 years of Marwah Studios, the President Sandeep Marwah has announced the launching of 162 international short films with directors of 162 countries of the World. First time in the history of entertainment industry some thing like that has been declared. Sandeep Marwah is the […] 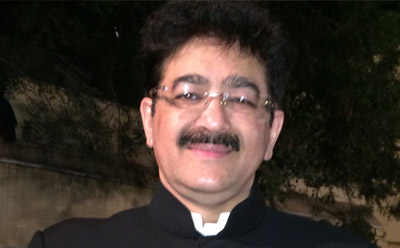