Noida Film City: â€œWe have created a World Record by touching 86th Edition of our festival. There is no other festival in the World to reach to 86th edition so farâ€ said Sandeep Marwah President of Marwah Studio at the inauguration of 86th AAFT Festival of short Digital Films at Marwah Studio.

â€œThis is the only festival which has given opportunity to more than 2000 directors from all over the World to showcase their debut film in last 22 yearsâ€ added Dean AAFT.

Some of the finest films during the festival were screened including â€˜Taj Mahal â€“Crown of Earthâ€™ directed by Aamir Naqvi, â€˜Maa Ki Aankhâ€™ by Hitesh Tandon, Bloody Red by Anjali, â€˜Sunainaâ€™ by Parvesh Saini, â€˜Side Effects of Criticismâ€™ by Alok Chaturvedi and â€˜Masoomâ€™ by Nikhil Kapoor

This is for the first time in the World where any film school has adapted a historical monument-A Wonder of The World as a part of its syllabus for making and studying cinema informed Marwah.

AAFT also celebrated its curtain raiser a day before where the H.E. Mentor Villagomez, Ambassador of The Republic of Ecuador in India released the poster of the festival. He was also accompanied by Dr. Patricio Garces, Head of political and cultural affairs, Embassy of Ecuador in India.

Sat Jan 9 , 2016
Noida Film City: The paintings are the real expression of your inner feelings and thinking blended with colors on canvas. This is one of the finest arts human being has discovered. Films are the extension of all these arts said Sandeep Marwah President Marwah Studio at the inauguration of painting […] 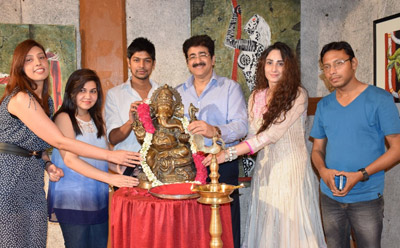