New Delhi: There is no surer foundation for a beautiful friendship than a mutual taste in literature. You need to know the language and Hindi is the best. Today is Hindi Day. Hindi Diwas, celebrated on September 14 every year, aims to raise awareness about the language and also commemorate the event when it was adopted as one of the official language of India. The Constituent Assembly of India had, in 1949, recognised and adopted Hindi as the official language of the country,” said Sandeep Marwah Chancellor of AAFT University of Media and Arts in the opening remarks at Hindi Diwas celebration during 7th Global Literary Festival Noida 2021

“Indian population in Cambodia is though small in number but it remains an intimate and close-knit group that has integrated well into local society. popular Hindi soap operas and films are shown by local TV channels dubbed in local Khmer language. Hindi newspapers are also available. It is a proud privileged for Indo Cambodia Film and Cultural Forum to be part of this 7th Global Literary Festival Noida 2021,” said H.E. Ung Sean Ambassador of Cambodia to India.

“All of us must use Hindi as our language. You should never feel hesitant in speaking your language. Our own prime Minister speaks in Hindi even though when he is on international platforms. Your growth depends on how well you can commute in your own language. Hindi  is one of the most popular language in the World,” said H.E. Akhilesh Mishra Designated Ambassador of India to Ireland.

“Feel proud of your nation Hindustan and your language Hindi, It is sad that it is not Hindi but  English is the language of status. We all have to work together to bring prestige to Hindi language. This is for the first time traditional courses like Engineering and Medical are going to be taught in Hindi under New Education Policy. Reading habits are essential to keep the light of Hindi on,” said Kunwar Vijendra Singh Chancellor Shobit University.

“Hindi is an Indo Aryan Language. It is the main language in India . About 800 million people speak Hindi in India. The Devanagari script is used to write Hindi. Previously Hindi was known as Hindui. Hindi developed from Sanskrit, the ancient language of India. Hindi started to develop in the 7th century  as “Apabhramsha” and became stable by the 10th century.  Dialects of Hindi include: Avadhi, Braj, Bhojpuri, Bundeli, Bagheli, Chhattisgarhi, Dogri and Marwari,” said Ashok Kumar Sharma and gave a wonderful detailed speech on history of Hindi. 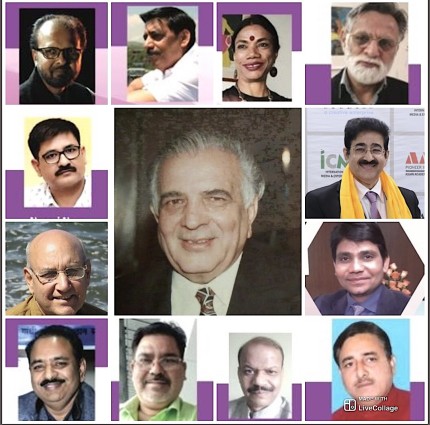