We extend our heartiest thanks to the Government of Poland for forming Indo Polish Film Association and nominating me as the Chairperson of the same. We are working on the development and promotion of cinema and other media between two countries now in a big wayâ€ said Sandeep Marwah President of GFFN

A poster to represent Indo Polish Friendship was released by the film dignities at the 7th Global Film Festival Noida 2014. Present on the occasion Neetu Chandra congratulated Marwah Studios for its efforts to create the bubbling film environment in north of India.

Tue Jan 5 , 2016
Popular Hindi Punjabi singer Tiku Hans shook the audience with his double beat music and fast numbers. His presence brought an excitement in the large filmy crowd who all enjoyed a well-planned entertainment program. â€œTiku Hans has been entertaining music lovers from now 8 years. His compositions have become popular […] 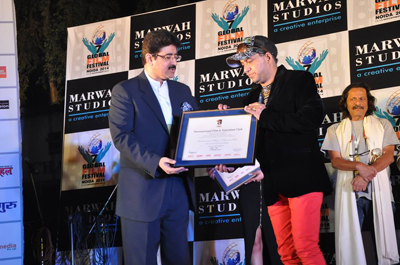