â€œI am impressed by the wonderful words stated by our honorable Prime Minister Narendra Modi that Islam and Hinduism can meet at Sufism. Keeping that in mind we have now promoted in a much bigger way our 5th International Sufi Festival to bring in love, peace and unityâ€ said Sandeep Marwah President of Marwah Studio introducing festival to the large audience present there from all over India and abroad.

â€œWe are always ready to extend our hand of friendship. No religion teaches you hate and war. Sufism is above religion. It is the devotion towards almightyâ€ expressed H.E. Abdul Basit High Commissioner of Pakistan to India.

The graceful presence of Dewan of Khawja Ajmeer Sharief Dargah Jenab Zain ul Aabidin spoke on the oneness of all the religion towards humanity. He shared his spiritual experiences with the audience. USA envoy Ivon Boekelheide said that there is a need to strengthen bonds of love.

â€œLove and tolerance is the key to success. We have always believe in and respect all the religions. India is the biggest example of spirituality. Sufism teaches you humanity,â€ said Dr. Bhisham Narayan Singh former Governor of Tamil Nadu.

In her speech Gulshah Begum who has entirely devoted her life for Saintly devotion in her capacity as chairperson of Divine Abode said that it is some Great spiritual power at Ajmeer Sharief, which directed her to devote her entire self for serving Sufiyat, & divinity .She highlighted contribution of Hazrat Khawaja Main-ud-din Chasti (RA) in Promoting mutual love & brotherhood.

While addressing the Function Khawja Farooq Renzushah, who is author of several books said that Kashmir has remained abode of Great Sufi Awaliyas since times immemorial who inculcated sprit of love and humanity.

Fri Jan 15 , 2016
New Delhi: A group of 32 full time MBA students of University of California Los Angles, USA visited Marwah Studio during their study tour to India to learn more about Indian Entertainment Industry and Bollywood. The education includes the case study of Sandeep Marwah from stage artist to founder of […] 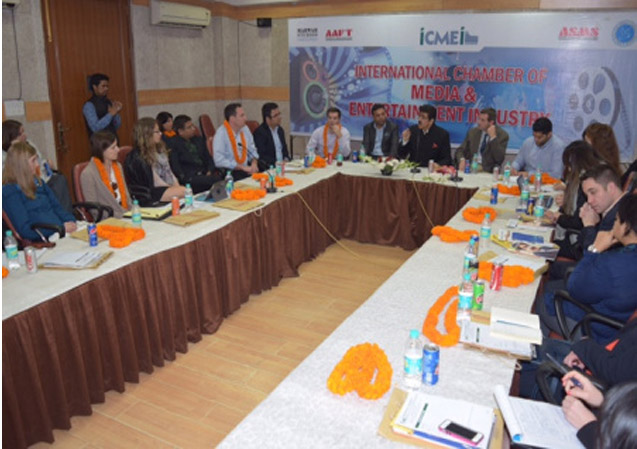