Noida: The second day of 5th GFJN celebrated World Radio Day as marked by United Nation and dignities present on the stage released the poster of World Radio Day to mark respect to one of the oldest medium of media.

â€œThe formation of Indo Maldives Film And Cultural Forum at this platform is an indication of bringing the World closer through the efforts of journalism,â€ said H.E. Ahmed Ambassador of Maldives to India on the opening of second day of 5th Global Festival of Journalism Noida 2017 at Noida Film City.

â€œIndia and Maldives relations go as back as our civilization but politically saying we are promoting our relations from last 50 years. This is a major step in building better relations,â€ added Ambassador.

â€œJournalism needs ample correction at different stages. Many journalists have forgotten the ethics and purpose of journalism. Good journalism can unite the World and bring positive attitude in the community,â€ said N.P.Singh District Magistrate of Noida narrating stories from his life.

â€œI am thankful to International Journalism Centre for making Mumbai as part of this greatest show of journalism and cinema as partner,â€ said Kumar Mohan renowned film critic and editor of Bollywood And TV.

â€œSandeep Marwah has created this film city where ample records have been formed, it needs wide international coverage which will bring India on a stronger platform in media,â€ added Ravindra Bawa renowned international journalist from BBC.

Sushil Bharti of Radio Noida 107.4FM, Rahul Makin of Fever FM and Kanupriya renowned presenter and Dr. Ajay Kumar Director ASMS shared their experiences of Radio business in detail and emphasized on the importance of most popular medium of Radio.

A book titles â€œBobby Pins And Other Short Stories by a young writer Debashree Banerjee was released on the occasion. An exhibition of Photography by the students of Asian School of Media Studies was also inaugurated by the dignities. News Bulletin on the activities of first day of 5th GFJN and poster to mark respect to Deen Dayal Upadhayaya was also released.

Sandeep Marwah was nominated as the Chairperson of Indo Maldives Film And Cultural Forum who later presented life membership of International Journalism Centre to the guest.

5th Global Festival of Journalism is An International Property

Mon Feb 20 , 2017
Noida: 5th Global Festival of Journalism Noida 2017 marked its presence internationally. It is now known to all the important nations of the World. The physical and virtual participation has gone to 140 countries of the World where ICMEI- International Chamber of Media And Entertainment Industry has its members. â€œ5th […] 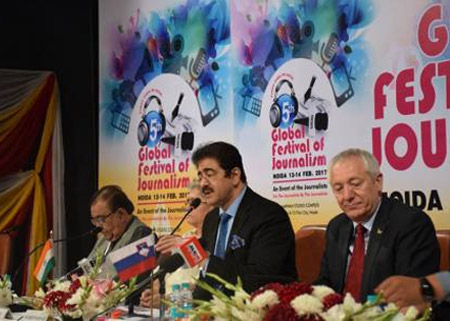