Noida: “There are plenty of talented people in the world. As you already know, talent is not enough. Some of the athletes with the most potential never pan out. What separates the good from the great is determination and work ethic, which you gain from sports of any nature,” said Dr. Sandeep Marwah Patron to Boxing Federation at the press conference to launch 5th Professional Fight of Boxing at Marwah Studios.

“If you have to work hard for anything, the final outcome is that much sweeter. Every ounce of sweat on the ground is another ounce of joy when the scoreboard is in your favor. There are no championship players or teams that tell reporters, “This was such an easy win.” Added Dr. Marwah introducing the rules and regulations of Boxing to the Press.

Amjad Khan the international player of Boxing and President of Amjad Khan Boxing Academy spoke about the teams participating in the fights. He answered the queries of the press.

The fight will take place in few days at Marwah Studios sponsored by AAFT University, ICMEI and sports Club of ASMS. UK based, World Boxing Champion and Olympic Medalist Amir Khan send his best wishes on the occasion.

Wed Jul 3 , 2019
New Delhi: A postage stamp to comrade 150th Anniversary of Father of the Nation Mahatma Gandhi, the Government of   Czech Republic released a stamp on Mahatma Gandhi at Embassy of Czech Republic in New Delhi. Dr. Sandeep Marwah Chancellor of AAFT University, the visiting Director General of Ministry of Trade from […] 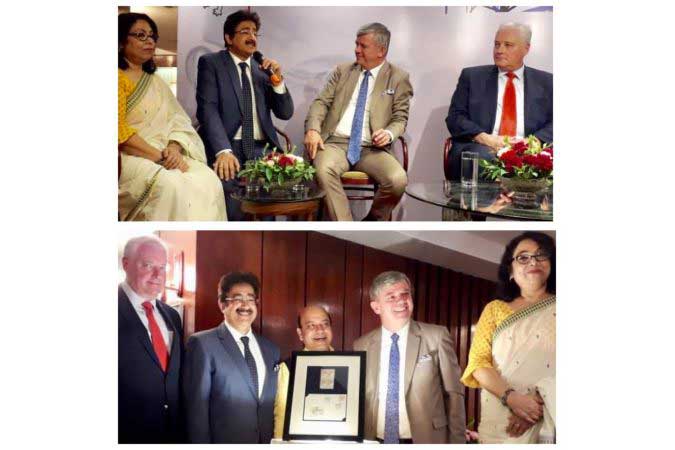