Noida: The NGY Infra Conclave is a platform for the citizens of the tri city area of Noida . Greater Noida and Yamuna Expressway to converge under one roof and discuss over the betterment of the city.

“The eminent speakers at the conclave not only share their vision for the future of the nation but also interact with the audience and address the issues faced by common man on day to day basis,” said Trilok Sharma President of the Conclave.

“Heads of state, business tycoons, Nobel laureates, spirited citizens and other invited guests at the conclave are not just the audience but a partner, a critical component of the machine that churns out the ideas for our collective future,” added Dr. Yogendra Narayan Chairman and former Secretary General of Rajya Sabha.

NGY INFRA CONCLAVE was held at Hotel Radisson Noida. Brain storming sessions were conducted on various aspects of the city of Gautambudh Nagar. Dr. Mahesh Sharma Union Minister of State for Culture and Minister of State Of Environment, Forest and Climate Change, Government of India inaugurated the session.

Present on the occasion were MLA Pankaj Singh, Mukul Singhal, Principal Secretary Housing and Town Planning UP Government, Alok Sinha, Principal Secretary Industries, Luv Kumar, DIG Gautambudh Nagar, B N Singh, District Magistrate Gautambudh Nagar and other senior officials of the district and state. Rajeev Bansal, Divisonal Chairman IIA addressed the gathering and spoke about the problems of the city and how to overcome them.

Wed Mar 21 , 2018
New Delhi: “Every painting, which has been displayed here expressing the patriotic feelings of the artists. The vibrations in this exhibition hall are now different. A new energy can be felt. This is called love, peace and unity through art and culture for which I have been working for years,” […] 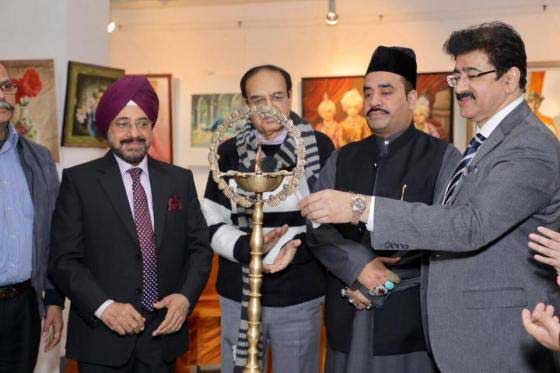