I am part of you Almighty, I loose nothing in handing over every thing back to You Lordâ€ said Sandeep Marwah President of Marwah Studios in the opening remarks on the inauguration of International Sufi Festival India emphasizing on good acts and humanity.

â€œThree times in Ajmer and now we have planned to give International Sufi Festival India more prominence and extra importance by bringing it to Noida Film Cityâ€ added Marwah. â€œ Sufism can be propagated through different mediums be it a music, dance or paintingsâ€ said Dr. Bharti Sharma renowned artist.

Gulsha Begum the founder of ISFI reminded the audience of unity, peace and love. She spoke about Sufism and Ajmer Sharif. Later Sandeep Marwah handed over the life membership of World Peace Development And Research Foundation to the honored guest. Dr. A.K. Srivastava Director ASMS paid vote of thanks on behalf of ICMEI-International Chamber of Media And Entertainment Industry.

Tue Jan 5 , 2016
Screening of Films, Workshops, seminars by Iranian Film makers is the part of Iran Cultural Week at Marwah Studios from 17th to 20th December, 2014 suggested Sandeep Marwah President of Marwah Studios while shaking hands with Embassy of Iran in India and Iran Cultural Centre. â€œSome of the finest films […] 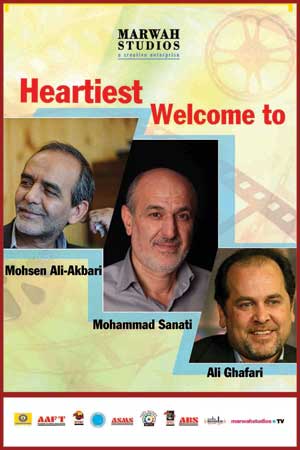