Noida: â€œParticipation of so many countries on 12th February â€“ International Day of Journalism and 13th World Radio Day proves that Love Peace and Unity is still the priority of the World. Here I have learned more than my expectations.â€ said H.E. Dr. Mbuya Isaac Munlo High Commissioner of Malawi to India, while inaugurating the World Radio Day on the second day of 4th Global Festival of Journalism Noida 2016.

4th Global Festival of Journalism offered workshops, seminars, master classes, documentaries, symposiums, talks, interactions with the people from all over the World and to bring Love Peace and Unity through journalism.

â€œRadio has proved to be the most popular medium of communication. It is also the completion of six years of our Radio Noida 107.4FM. Radio Noida can be heard all over the World through mobile and internet,â€ added Sandeep Marwah, President of Marwah Studio and Global Cultural Minister.

â€œJournalists must realize their responsibility while reporting and publishing news. Every word leaves an impact on the reader. We are here to build the nation,â€ said Yogendra Narain Former Secretary General of Rajya Sabha and Chairman ICMEI Planning Commission.

â€œThe trends must change from negative news to positive news. This is the country of young people, we must guide them through all the mediums of mediaâ€ expressed Sushil Tripathi the former Secretary Ministry of Petroleum and Natural Gas, Government of India.

A poster of No More Missing Campaign, Poster of International Womenâ€™s Film Forum, a book on film industry- Unmasking and a news letter all were released by the guests. Later Sandeep Marwah honored the guest with the life membership of International Journalism Centre of AAFT.

The festival was attended by large number of film, television and media persons from all over India and abroad. H.E. Dr. Mbuya Isaac Munlo High Commissioner of Malawi to India proposed to start the Indo Malawi Cultural Forum soon.

Indo Nepal Cultural Forum Will Be Launched at ICMEI

Tue Feb 23 , 2016
New Delhi: Sandeep Marwah President of International Chamber of Media And Entertainment Industry briefed to Khadga Prasad Sharma Oli the Prime Minister of Nepal about the formation of Indo Nepal Cultural Forum to develop and promote the relation between two countries in a big way through art and culture on […] 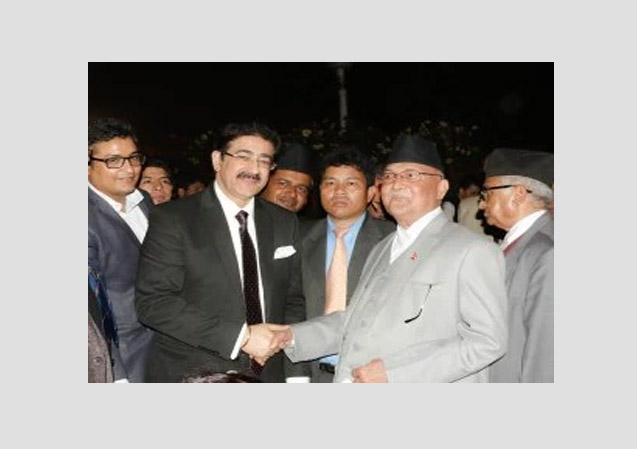