New Delhi: Another feather in the cap of Sandeep Marwah when the management of Vajra records registered the World Record created by Sandeep Marwah in film production of Short Films in their books of World record.

“Sandeep Marwah is the only producer in the World who has produced till now 2300 short films from 5 minutes to 55 minutes and given opportunity to more than 10,000 film persons from more than 100 countries of the World. All these productions have taken place under the banner Marwah Films And Video Productions in last 25 years”.

Sandeep Marwah President of Marwah Studios and Asian Education Group has been in films, television and media for almost 30 years. Producing short films is his passion. The films contain all genre mostly social issues.

Marwah has been honored earlier on many platforms in India and abroad. His contribution to films, television and media is remarkable. He is chairing 100 different organizations to promote love, peace and unity through art and culture.

‘Vajra World Records’ is the Indian equivalent to the Guinness Book of World Records with emphasis on unique achievements of Indians within the country and abroad. It’s a salute to all those Indians who want to do something different and be remembered for their distinctive deeds.

The idea of this kind of book strings together ‘Indian’ achievements originated in 1989, the objective was simple- to provide a platform to ordinary Indians to showcase their talent in their search for excellence.

Tue Apr 24 , 2018
Noida: 2nd Global Fashion And Design Week Noida 2018 brought many new waves to the working of International Chamber of Media And Entertainment Industry. One of them was formation of Indo Gambian Film And Cultural Forum. The Ambassador of Gambia to India Her Excellency Jainaba Jagne nominated Sandeep Marwah renowned film […] 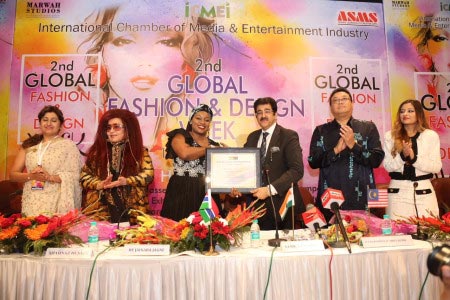