The first of its kind in the World, 3rd edition of global Festival of Journalism Noida 2015 has been fixed for three days from 12th to 14th February 2015 informed Sandeep Marwah President of the Festival.

International Journalism Centre, a body of journalists, is going to present the festival keeping in mind the high standards of last two festivals conducted here in Noida earlier.

International Journalism Centre under the leadership of Sandeep Marwah also declared in previous years 12th February as the International Day of Journalism which has been followed by thousands of journalists and journalistic organizations all over the World.

â€œA very unique concept of celebrating journalism through festival designed three years back has started taking a powerful shape in this country. I hope that very soon it is going to be an international brandâ€ said Sandeep Marwah declaring the final dates to the media World.

Chamber For Media And Entertainment Will Open Office In Bangladesh

Fri Jan 8 , 2016
We still have to learn to make powerful and entertaining films. Bangladesh is crazy about Indian Cinema. I can initiate the talks between two countriesâ€ said Adam Dawla an award winning film maker from Bangladesh during his meeting at the International Chamber of Media And Entertainment Industry at Noida Film […] 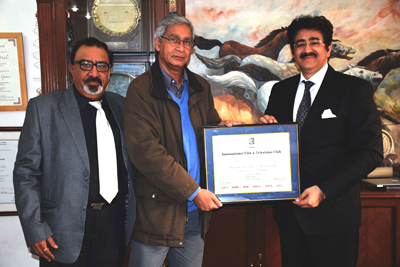