New Delhi: ICMEI- International Chamber of Media And Entertainment Industry takes this pleasure and honor in releasing the first ever book on Indian Television titled- ‘Once Upon A Prime Time’ written by National Award Winning Actor Director Ananth Mahadevan in he presence of bigwigs of Indian film and television industry,” said Dr. Sandeep Marwah President of Marwah Studios and Chancellor of AAFT University of Media and Arts.

“Whenever you read a good book, somewhere in the world a door opens to allow in more light. I would stop reading a book if it were possible for me to talk half an hour with the man who wrote it and the day has come when I am interacting with this great show man- Ananth Mahadevan,” added Dr. Marwah also President of ICMEI.

“The book is in all probability, the first ever story of Indian television. Besides taking one down memory lane, this could be a throw-back for all those connected with the medium, past and present,” expressed Ananth Mahadevan addressing more than 100 guests on webinar.

Dream Girl Hema Malini has written the foreword of the book. Ananth Mahadevan records the memoirs of his journey on Indian television. From first hand experiences with filmmakers who were the founding fathers of television serials to today’s consumerism driven shows, he has tasted them all.

Present on the occasion renowned film director Rahul Rawail said, ”I am very happy to be here on this very auspicious function of Release of Book of Ananth, I extend my heartiest congratulations to him for this great venture,” Anand Mahendru a well known television director recollected his interactions with Ananth during making of his television programs.

Popular director Pankaj Parashar said,” You can’t buy happiness, but you can buy books and that’s kind of the same thing”. He informed how simple were the days of early filmmaking. Writer Director Aziz Mirza, blessed Ananth and asked him to be ready with the next edition immediately.

The book OUAPT incorporates exclusive moments and incidents with many celebrities and award-winning directors. He joins the actors on their sets as they perform for television and learns about the stories that made the shows come to life. Covering artistes and makers who impacted our world, such as Amitabh Bachchan, Hrishikesh Mukherjee, Sai Paranjpye, Basu Chatterjee, Kundan Shah, Ravi Chopra, Ramesh Sippy, Farouque Shaikh, Gulzar and Govind Nihalani.

Dr. Yogendra Narain former Secretary General Rajya Sabha and now Chancellor of Hemwati Nandan Bahuguna Garhwal University graced the occasion with his presence. Later Ananth Mahadevan answered many questions raised by the audience on the different aspects of book. The book Once Upon A Prime Time is published by Embassy Books. Ashok Tyagi Secretary General of ICMEI conducted the program and paid vote of thanks.

Thu Jun 25 , 2020
London: The Board and Management of the Africa Asia Scholars Global Network (AASGON) and the Global South Economic Forum (GSEF) has announced the presentation of the highest international award to Dr. Sandeep Marwah and a title for him as The Global Cultural Chancellor for his untiring contribution to the promotion of films, […] 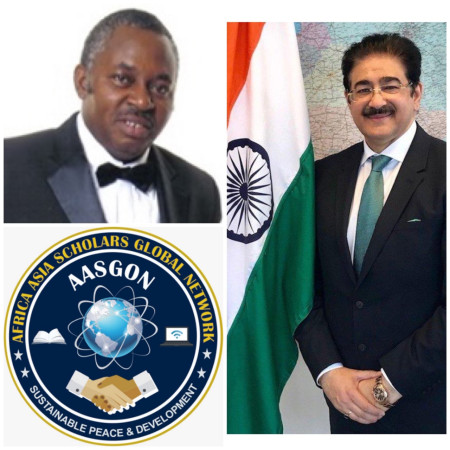