Corona has become an epidemic world wide, forcing even the global superpowers to lock down their nations.The pandemic has infected around 20 lakh people, out of which 1,25,000 individuals have lost their battle of life. 11 thousand citizens have been contaminated by this virus till now, and the numbers are increasing rapidly. On tuesday, 24th March, Prime Minister Narendra modi addressed the nation and informed everyone regarding the 21 days lockdown. Lockdown was a huge task as it meant   shutting down an entire nation of 36 states and territories spanning over 3.2 million square kilometres for three weeks.The implementation of this measure was needed to keep people indoors and help in breaking the chain, effectively slowing down the virus transmission.

Even though the Government has taken severe steps to minimise people’s discomfort during this lockdown, still there are several issues from which citizens are dealing in this quarantine.Shortage of daily needs essentials being one of them. While every possible step to tackle the Coronavirus outbreak is being taken, the effect this pandemic is having on our environment is very startling.

Wuhan, the epicentre of the Coronavirus outbreak is also a major industrial hub. When things were normal, Wuhan had a hazardous air-pollution level, which has now surprisingly come down by 21.5 per cent according to data revealed by China’s Ministry of Ecology and Environment.The satellite images shared by European Space Agency and NASA establish that the nitrogen dioxide pollution has come down significantly in the region.

Reduced tourism in Venice has allowed nature to take control and the water in the canals have self-cleansed to reveal the floating fish inside, who are otherwise not visible.Many other regions are also observing significant environmental benefits as a consequence of the Coronavirus outbreak. For instance, researchers in New York registered a 50 per cent decline in carbon monoxide levels, which is caused due to car emissions. The researchers at Columbia University also established that the traffic levels in the city have come down by around 35 per cent as compared to the data a year ago.

On the fine morning of 5th April 2020, the residents of Jalandhar woke up to an awe striking view of Dhauladhar range of Himalayas. The people were blessed by this magnificent site after a time span of 30 years.  The snow-clad peaks were a sight to behold as pollution levels dipped remarkably across the two states.

Not only nature but the fauna is also getting positively affected by this lockdown. As mankind is forced into the restraints of their homes, several animal sightings have been reported after lockdown. The animals have been spotted frolicking around the streets of metropolitan cities.For instance, A grand nilgai took over the streets outside Noida’s GIP Mall that had seemingly migrated from a neighbouring natural zone .A small Indian civet was jaunting on the roads of Calicut in the afternoon hours, enjoying the fresh air. This civet, endemic to the Western Ghats, is one of the critically endangered animals that was probably last spotted in 1990.A beautiful long-horned Sambhar deer was seen hiding behind the cars near a market area in Chandigarh, and the list of sightings is never ending.

It seems like nature is rebooting itself. This virus may be a foe for the human race, but is surely proving to be a friend of nature. Now the real question is how long this freshness will last? Will we be able or even try to keep the beauty of this nature intact after this lockdown, or will the things get back to their previous conditions?

Fri May 1 , 2020
New Delhi: The most active cultural promotional organizations like Asian Academy of Arts have come down to halt. No events, no interactions, no shows, no dramas, music and dance recitals. Covid 19 the Corona virus has changed the whole scene. National Lockout will not permit anyone to move to any […] 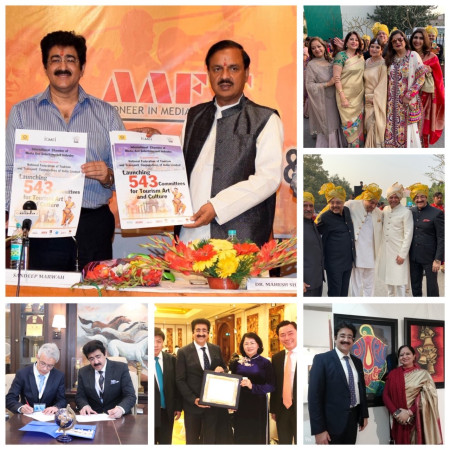 ICMEI Webinar on Effect of Covid 19 On Indian Cinema

ICMEI Presented Webinar on Role of Journalists In Covid 19