New Delhi: Twenty Nine years in business, Marwah Studios-an island of excellence, is now an International brand in Media touching its presence in almost 145 countries of the World and associated with not only films, television, print, radio, new media but also linked with education, tourism & hospitality, fashion & design, environment and climate change, skill development and probably all government social initiatives.

“We are here to serve the nation and international media and entertainment industry. Our every effort is towards uplifting humanity. We have always believed that you can bring in love, peace and unity in the world through art and culture,” said Dr. Sandeep Marwah founder of Marwah Studios.

Many powerful organizations like MFVP– Marwah Films And Video Productions (World Record Holder of largest number of short films), IPBF-International Public Broadcasting Forum consisting of Radio Noida 107.4FM a community radio station and MSTV a community television station of broadcasting, IWFF– International Women’s Film Forum( to look after the needs and requirements of todays women in society and business, And ICFF– International Children’s Film Forum (to look after the needs of and requirements of young children) are the marvelous creations of Marwah Studios.

Marwah Studios has been appreciated, awarded and mentioned by many head of the states, film, TV and Media personalities of the World. It has been the case study in large number of countries and educational institutions. Marwah Studios latest formations ICMEI- International Chamber of Media And Entertainment Industry(first dedicated chamber of M&EI) and AAFT University of Media And Arts(first film university of the country) have surprised the whole World.

“Happiness is when what you think, what you say, and what you do are in harmony. Where there is love there is life. In a gentle way, you can shake the world. Action expresses priorities. The future depends on what we do in the present. I will not let anyone walk through my mind with their dirty feet. If you don’t ask, you don’t get it,” Dr. Sandeep Marwah seven times World Record Holder read the quotes loudly.

Fri Apr 3 , 2020
New Delhi: IFTC- International Film and Television Club was established by Sandeep Marwah a well know international media person way back in 1993 to promote film and television education at Asian Academy of Film & Television and films, art and culture on a global level. Powerful interactions with national and international film, […] 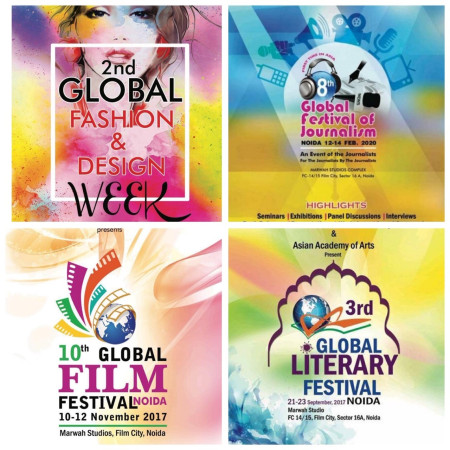