Noida: A seminar was organized to discuss the changing scenario of media in India with especially emphasis to print, television and social media during the 8th Global Festival of Journalism Noida at Marwah Studios.

“People were amazed when we started social media as part of the syllabus for the students of journalism few years back, no body realized that this medium will be the most popular and will involve anyone and everyone into its system,” said Sandeep Marwah President of the festival and initiated the discussion.

“Journalist cannot be away from the idea that he is the most responsible part of the society and what ever medium he is using he has to be very sure of his words. His words can make the society and can destroy the society,” said Ricardo A Berna M, Charge D’ Affairs Embassy of Panama in India.

A Poster of renowned journalist Ganesh Shankar Vidyarthi was released to mark respect to the most responsible profession of journalism on earth. Dignities also released the News Bulletin of second day designed by students of journalism.

Later Dr. Sandeep Marwah honored and presented all the distinguished guests with life membership of IJC-International Journalism Centre and memento of 8th Global Festival of Journalism.

Seminar on Literature and Journalism at 8th GFJN

Fri Mar 13 , 2020
Noida: Third day of 8th Global Festival of Journalism Noida 2020 saw many interesting events including seminar on Literature and journalism at Marwah Studios. “When journalism is silenced, literature must speak. Because while journalism speaks with facts, literature speaks with truth,” said Dr. Sandeep Marwah Chancellor of AAFT University and initiated […] 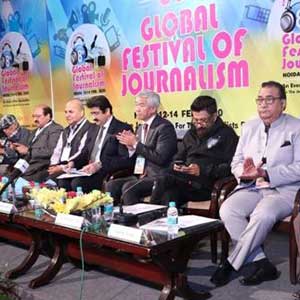