New Delhi: The President of ICMEI International Chamber of Media And Entertainment Industry Dr. Sandeep Marwah Presented a memento to pay his gratitude to the Ambassador of Serbia H.E. Vladimir Maric on the National Day of Serbia at Embassy of Serbia in New Delhi.

“We are proud of H. E. Vladimir Maric for his permanent support and involvement in building and maintaining relations with the World of films, television, art and culture. Under his patron ship we have been able to create and work uninterrupted under Indo Serbia Film And Cultural Forum,” said Dr. Sandeep Marwah President of Marwah Studios.

“I am more than satisfied with the response of Indo Serbia film And Cultural Forum. We have tried our best to make it a very vibrant organization. Dr. Sandeep Marwah’ s efforts and passion for art an culture brought this organization to International level,” thanked H.E. Vladimir Maric

Dr. Sandeep Marwah probably is the only Indian to be honored with two Serbian Doctorates {Honoris Causa} during these four years of ISFCF formation. 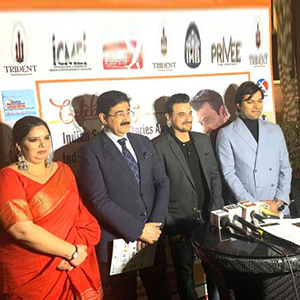