A memento was presented to him by the President at the Embassy in grand function stating- “A token of appreciation for consistently sharing friendship, development, cooperation and solidarity with the people of India to bring peace unity and love”.

“Even though it was short tenure of H.E. Farod Arziev, but It has given a birth to Indo Uzbekistan Film And Cultural Forum and lead to largest number of programs including music recitals, dance recitals, exhibitions, interaction programs, visits of delegations from Uzbekistan, visits from India to Uzbekistan, Participation in Global Film, journalism, fashion, literary and tourism festivals and regular participation in talks, book releases, seminars, etc. IUFCF has been partners to Embassy of Uzbekistan on all occasions,” said Dr. Sandeep Marwah.

Uzbek Ambassador to India Farhod Arziev whose two-and-a-half year tenure in Delhi saw transformation in bilateral ties and elevation to a strategic partnership has been appointed First Deputy Foreign Minister which is equivalent to the rank of Foreign Secretary.

“I am thankful to ICMEI in supporting in fulfilling our vision and mission. They will always remain friends to Uzbekistan,” said H.E. Farod Arziev.

Fri Mar 13 , 2020
Noida: “A nations culture resides in the hearts and soul of the people. If we are to preserve culture we must continue to create it.  Today at Marwah Studios, we are celebrating the success of the first edition of national cultural program Jashn E Hind said Dr. Sandeep Marwah President […] 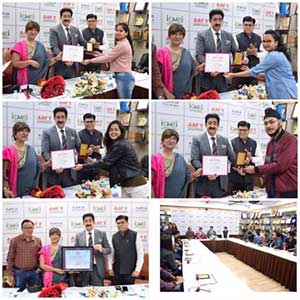