“We are happy to receive Charlotte from Paris, France where she is involved with theatre, television and cinema. Her enthusiasm is great and I am sure she would like to share her experience with the young students of AAFT,” welcomed Sandeep Marwah President of Marwah Studios.

“I am feeling at home. The environment at Marwah Studios is so appealing and inviting. I am thankful to Dr. Marwah for his hospitality and has been generous to guide me,” said Charlotte Londsay.

Radio Noida 107.4FM and MSTV covered the visit of Charlotte and interviewed her as a creative artists which will be broadcast very soon all over the World.

Later Dr. Sandeep Marwah honored and presented Life Membership of International Film And Television Club of Asian Academy of Film And Television to actress Charlotte Londsay who was accompanied with her uncle Kazem Samandari a well known businessman.

Seminar on Changing Scenario of Media at 8th GFJN

Fri Mar 13 , 2020
Noida: A seminar was organized to discuss the changing scenario of media in India with especially emphasis to print, television and social media during the 8th Global Festival of Journalism Noida at Marwah Studios. “People were amazed when we started social media as part of the syllabus for the students of […] 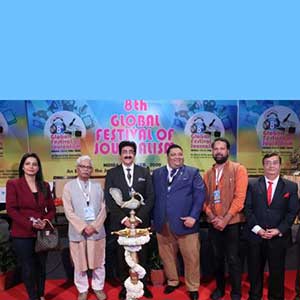