Noida: “On this World Radio Day Celebrated, let us recognize the enduring power of radio to promote diversity. And help build a more peaceful and inclusive world.” Albeena Abbas Director AAFT School of Journalism. Read the words written by the UN Secretary-General António Guterres. To start the program of the second day of 8th Global Festival of Journalism Noida 2020 at Marwah Studios.

Such as “Radio is a powerful medium for celebrating humanity in all its diversity and constitutes a platform for democratic discourse. At the global level, radio remains the most widely consumed medium.” Said Sandeep Marwah President ICMEI introducing the program to the large audience.

“This unique ability to reach out the widest audience means radio can shape a society’s experience of diversity. Stand as an arena for all voices to speak out, be represented and heard.” said Narender Gupta Senior Journalist from Mumbai.

“Radio stations should serve diverse such as communities, offering a wide variety of programs. Viewpoints and content, and reflect the diversity of audiences in their organizations and operations.”  Added Paresh Rughani International Motivational Speaker from London.

“Radio is uniquely positioned to bring communities together and foster positive dialogue for change. By listening to its audiences and responding to their needs, radio services provide the diversity of views and voices needed to address the challenges we all face.” Said Dr. Mohamed Shoukr Nada, such as  Cultural Counsellor, Embassy of Egypt.

“The objectives of the Day are to raise greater awareness among the public and the media of the importance of radio.” Added Ranjan Mukherjee, Senior Journalist.

That such as “Radio brings people together. In an era of rapid media evolution. That such as radio retains a special place in every community as an accessible source of vital news and information.” Said H E Paulias Korni, High Commissioner of Papua New Guinea.

“The World Radio Day this year moves around the theme of “Radio and diversity.” UNESCO and UN calls on radio stations to uphold diversity, both in their newsroom and on the airwaves.” Reminded H.E. Nejemeddine Lakhal, Ambassador of Tunisia to India.

Later a poster was released to mark respect to the Radio Day. Which falls on 13thFebruary, by the dignities. Dr. Sandeep Marwah presented life membership of IJC- International Journalism Centre to the guests along with the memento of the festival.

Tue Feb 25 , 2020
Noida: Three days fashion and food festival was organized by C D Foundation in association with International Chamber of Media And Entertainment Industry at WAVE cinema to create awareness about the art and culture of many countries together. The country of Vietnam, UAE, Turkey, Tunisia, Romania, Poland, Palestine Lebanon, Kyrgyzstan, […] 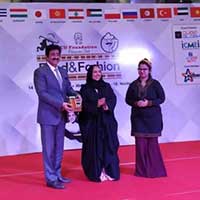