Noida: A Memorandum of Association was signed between Sandeep Marwah President International Chamber of Media And Entertainment Industry and H.E Nejmeddine Lakhal Ambassador Republic of Tunisia to India to develop and promote films, television media ,art and culture.

“We are pleased to sign an arrangement with ICMEI and its associates for the development and promotion of arts and culture between two countries. We want to bring people of two countries close to each other through art and culture,” said H.E Nejmeddine Lakhal Ambassador Republic of Tunisia to India.

“It is a lucky day –World Radio Day and India and Tunisia through ICMEI and Embassy of Tunisia have decided to work on different subjects together bring both the countries close to each other through films, media, art and culture,” added Dr. Sandeep Marwah President ICMEI.

A scholarship has been announced for the deserving student from Tunisia to study at Asian Academy of Film And Television, a festival of films from Tunisia, A cultural show has also been announced. Soon ICMEI will start working on the joint venture of animated film also.

Fri Feb 21 , 2020
Noida: “On this World Radio Day Celebrated, let us recognize the enduring power of radio to promote diversity. And help build a more peaceful and inclusive world.” Albeena Abbas Director AAFT School of Journalism. Read the words written by the UN Secretary-General António Guterres. To start the program of the […] 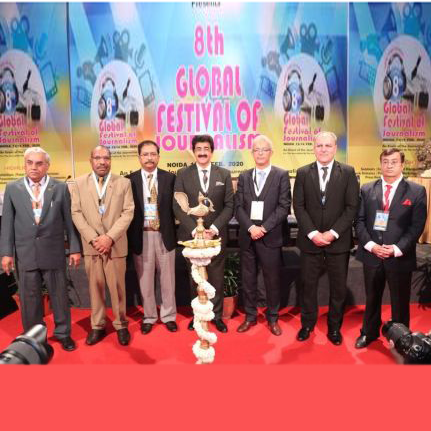