“Music makes you a real human being as it provokes emotions with in. Music is spiritual it has the power to bring people together. Music is a moral law. It gives soul to the universe, wings to the mind, flight to the imagination, and charm and gaiety to life and to everything,” said Dr. Sandeep Marwah President AAFT School of Performing Arts at the inauguration of Mehfil E Ghazal designed by the students of performing arts.

The mesmerizing performance of students won the heart of the audience who all sang the popular numbers earlier recorded by Jagjit Singh.

Mon Feb 17 , 2020
Noida: The most exclusive festival, first of its kind in Asia and second in the World saw the grand opening of its 8th edition at Noida Film City hosted by Marwah Studios. The colorful flags of different nations were quite inviting and speaking about the international presence at the festival. In […] 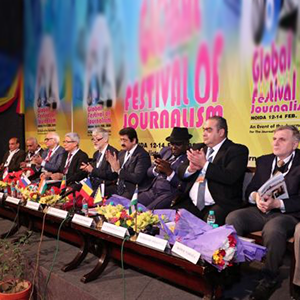