London: The Chief Scout For India Sandeep Marwah recently positioned next to the President of India. 2020 Brought Prestigious Award For Chief Scout For India in England Who is the Chief Patron of Scouts and Guides in India. In the department of Scouts and Guides in the Republic of India. Was honored in London for his untiring contribution to overall development of the country.

“Sandeep Marwah is a legend, a real source of inspiration for all of us. He is one of the few celebrities in the World who has used. The spiritual powers for the benefit for the Society. I admire his way of working,” Said Angelique Monet a philanthropist herself. 2020 Brought Prestigious Award For Chief Scout For India in England. Sandeep Marwah titled such as Global Cultural Minister, Global Green Ambassador, Global Media Guru, Icon of Decade and many more.

Sandeep Marwah with seven World Records to his credit in films. Television and media is one of the most popular International personalities of the country. He is the founder of Noida Film City. Marwah Studios and Chancellor of AAFT University. Sandeep Marwah is chairing more than hundred organizations. He has been titled such as Global Cultural Minister, Global Green Ambassador, Global Media Guru, Icon of Decade and many more. 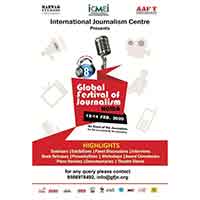 IJC’s Global Festival of Journalism Noida is Most Exclusive