London: “We are the only festival of this kind in the World where Good journalism is promoted on a Global scale. The 8th edition of Global Festival of Journalism is going to be on 12th to 14th February, 2020 at Marwah Studios, Film City Noida,” announced Dr. Sandeep Marwah President of the Festival with International press at Hotel Dorchester, London.

The 8th edition is going to have large number of workshops by renowned journalists, seminars on the current topics, discussion on social subjects, interactions on current affairs, symposiums on mediums of media, Screening of documentaries, entertainment programs and book releases.

“The main attraction of the event is going to be the presentation of newly constituted ‘Mahatma Gandhi National Award For Journalism’ at the 150th Birth Anniversary of Mohandas Karamchand Gandhi- Father of the Nation sponsored by Mahatma Gandhi Forum & AAFT University, which will be another grand function in series,” added Dr. Marwah.

Journalists from United Kingdom are also invited to participate in the show in any of the capacities mentioned above. Large participation has already been marked in earlier editions. 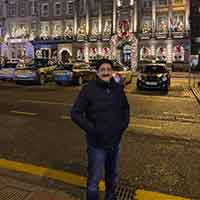