New Delhi: Renowned media person Sandeep Marwah once again been honored and appreciated for his deep contribution to the field of journalism at the 27th annual function of NAI- News Paper Association of India at Convention Centre at NDMC building.

Sandeep Marwah is the founder of Noida Film City, Marwah Studios and promoter of one of the best Journalism Schools in the World-AAFT School of Mass Communication & Journalism. He is the instrument in announcing ‘12th February as The International Day Of Journalism’. He is the editor of 24hours Radio Station- Radio Noida 107.4FM and a TV Station MSTV.

“He is the president of Global Festival of Journalism- The biggest journalism festival on this earth. Dr. Marwah is the producer of largest number of short films in the World,” announced Vipin Gaur Secretary General of NAI.

Dr. Sandeep Marwah, now Chief Scout For India, is the Patron to NAI and is associated with organization from last 26 years. The management team of NAI presented the award to Sandeep Marwah. Later Sandeep Marwah presented awards to the most prominent people of the society and selected journalists for their sincere contribution.

Sandeep Marwah Was Appreciated For His International Contribution

Mon Jan 6 , 2020
New Delhi: Sandeep Marwah President of Marwah Studios was appreciated and honored for his super international relations and contribution to Global Cultural Diplomacy by Aas Ek Paryas an NGO at ISKCON Temple Auditorium recently. “Sandeep Marwah is the only person who has been nominated by 54 Governments of different nations […] 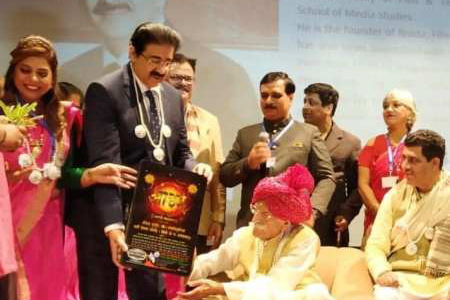