New Delhi: Renowned film, television and media personality Sandeep Marwah has been nominated on the board of South India International Film Festival as Patron to guide them with his vast experience in organizing film festivals.

“We are lucky to have Dr. Sandeep Marwah seven times World Record Holder on the board of SIIFF. Today we have grown bigger in quality and quantity at the same time,” said V. P. V. Yugta Murthy Vice President of the festival.

The SIIFF aims to serve as a platform for film makers to reach out to audiences, and also promises to promote films made in many regional languages along with the quintessential Hindi films.

“I am thankful to SIIFF for believing me and nominating as their patron advisor. Will leave no stone unturned to support the festival,” said Sandeep Marwah accepting the responsibility.

Fri Dec 27 , 2019
New Delhi: In a colorful and a grand function at Eros A newly constituted IKFCF-Indo Kyrgyzstan Film And Cultural Forum was announced and inaugurated by H.E. Asein Isaev Ambassador of Kyrgyzstan o India in association with ICMEI- International Chamber of Media And Entertainment Industry. A vibrant poster of India and […] 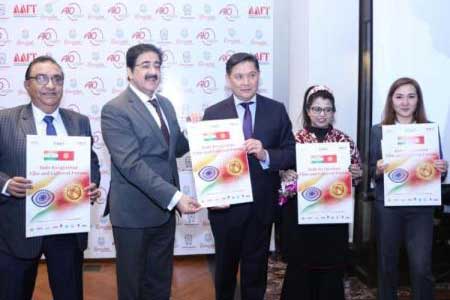