New Delhi: In a colorful and a grand function at Eros A newly constituted IKFCF-Indo Kyrgyzstan Film And Cultural Forum was announced and inaugurated by H.E. Asein Isaev Ambassador of Kyrgyzstan o India in association with ICMEI- International Chamber of Media And Entertainment Industry.

Political ties with the Kyrgyz Republic have been traditionally warm and friendly. We need to develop relation between people to people of two countries. There is lot to offer under IKFCF. We will soon be declaring scholarship for the deserving student from Kyrgyz Republic to learn cinema in India,” said Dr. Sandeep Marwah President of ICMEI.

Both countries share common concerns on threat of terrorism, extremism and drug–trafficking. Since the establishment of diplomatic relations in 1992, the two countries have signed several framework agreements, including on Culture, Trade and Economic Cooperation, Civil Aviation, Investment Promotion and Protection, Avoidance of Double Taxation, Consular Convention etc. We are happy that we will now work on cultural diplomacy,” said H.E. Asein Isaev.

Fri Dec 27 , 2019
New Delhi: H.E. Asein Isaev Ambassador of Kyrgyzstan to India now Patron to newly framed Indo Kyrgyzstan Film And Cultural Forum created by ICMEI-International Chamber of Media And Entertainment Industry and Embassy of Kyrgyzstan in New Delhi. “The Forum has the experienced guide and patron to proceed further in developing […] 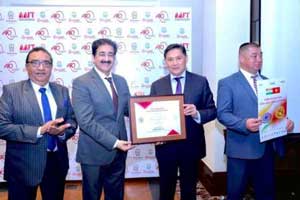