New Delhi: The seventh World Record of Dr. Sandeep Marwah got approval from Vajra Book of World Records when a citation, award and medal was granted to him by this well known organization from Bangalore. The staff and management congratulated Dr. Marwah..

Sandeep Marwah is the only person in the World who has been nominated by 54 Governments of the World as their Cultural Ambassador, Representative, or Chair for Cultural Forum.

The nomination to Sandeep Marwah, President of Marwah Studios, as cultural representative of the country is by either by the President of the Country or the Prime Minister of the Country. Nomination is also by the Governors, Federal Ministers, Government Officials, Ambassadors and High Commissioners of the respective countries.

All these countries are part of five continents including North America, South America, Asia, Europe and Africa. All this has happened in last ten years though Sandeep Marwah has been in the business of promoting art and culture for almost thirty years.

“We are proud of Sandeep Marwah,” said Ashok Tyagi Secretary General of ICMEI. ”At last hard work and sincerity pay in life,” said Rajiv Mathur Director ICMEI. “It is a moment of excitement and we all are feeling elevated, It is a celebration time,” added Haripriya Director Events Marwah Studios.

Tue Dec 31 , 2019
New Delhi: Renowned media personality and social worker Dr. Sandeep Marwah Chancellor of AAFT University was honored with prestigious Mother Teresa Humanity Award 2019 for his untiring contribution to human upliftment. “Its not about how much you do, but how much love you put into what you do that counts. […] 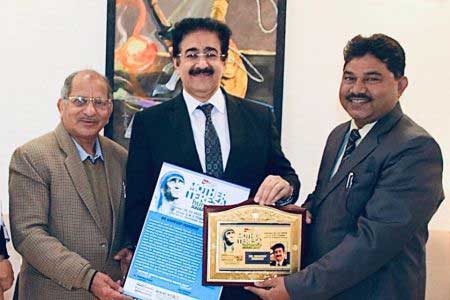