Sandeep Marwah is the founder of Noida Film City and had designed this city way back in 1986, got its clearance from Lucknow in 1987, allotments were made in 1988, studios were in functioning condition in 1991 and since then no looking back.

“Noida Film City is the fastest growing film city in the World today with 16 studios in 25 acres, 350 channels are being broadcast to 162 countries 24×7, 17000 media professionals are working here in 3 shifts of 8 hours each and cascading effect is that around 100,000 people earning their bread directly and indirectly from the film city and credit goes to Sandeep Marwah,” citation was read by Dr. Sanjeev Layek Executive Secretary of WASME.

“I am thankful to WASME for considering me for this award. I am also thankful to the state Government of UP and Central Government for cooperating to their best in fulfilling my dream and vision into reality,” said Dr. Sandeep Marwah while accepting the award.

Sat Dec 21 , 2019
New Delhi: A powerful MOU- Memorandum of Understanding has been signed between ICMEI- International Chamber of Media And Entertainment Industry and Embassy of Myanmar in India representing Government of Myanmar to promote art and culture of both the countries. The MOU was signed by Dr. Sandeep Marwah President of ICMEI […] 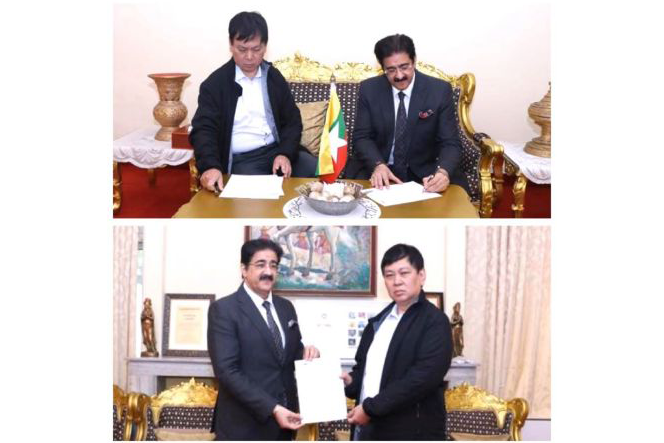