Noida: The visit of H.E. Moe Kyaw Aung Ambassador of Myanmar to India brought new energy to the international campus of ICMEI- International Chamber of Media And Entertainment Industry at Marwah Studios when a new committee on Myanmar under the name and banner of Indo Myanmar Film And Cultural Forum was declared open.

“We have achieved a new target by opening a new committee on Myanmar. Not many people are aware of Myanmar and its beauty. We are neighbors to India and want to do a lot of business between the two countries including cinema and tourism,” said H.E. Moe Kyaw Aung Ambassador of Myanmar to India.

“It is not only necessary but essential to develop contact between people to people of two countries. ICMEI will support both the governments to fulfill their desire of building up bigger and better relation and cooperation,” said Dr. Sandeep Marwah President of Marwah Studios and ICMEI.

A poster was launched on the occasion to mark the opening of the forum. H.E. Moe Kyaw Aung Ambassador of Myanmar nominated Dr. Sandeep Marwah as the   Chair for Indo Myanmar Film And Cultural Forum. In return Dr. Marwah presented the Patronship to the Ambassador. The launching will be followed by the formal event of signing of MOU by Embassy of Myanmar and ICMEI informed Ashok Tyagi Secretary General of ICMEI. 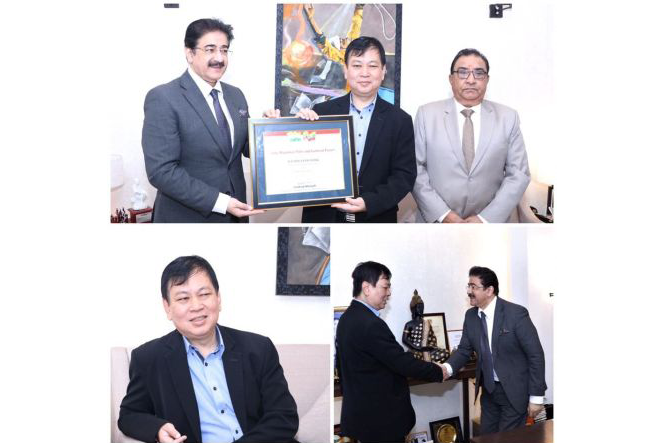