Noida: A powerful workshop by a well-known film maker and educationist Dr. Balazs Vargawas conducted at Asian Academy of Film And Television organized by Indo Hungarian Film And Cultural Forum in association with Hungarian Information And Culttural Centre of Embassy of Hungary in India

A box office hit musical comedy Dollybirds/Csinibaba directed by Peter Timar made in 1997 was screened during workshop, which is about the early 1960s. The film is a cult classic of post-socialist nostalgia, depicting Eastern European’s longing for different living and for (imaginary, Western) worlds that were never existed.

Balazs Varga is a founding editor of Metropolis, a scholarly journal on film theory and history based in Budapest. His recent research project has examined the post-communist transition of the Hungarian film industry. His current project focuses on popular East European cinemas. He has published several articles and essays in English, Italian, Polish, Czech and Hungarian books and journals.

The film maker answered many questions asked by the film and media students. The Cultural counselor and Director of HICC Pal Bodogh Szabe extended his cooperation for all time to come.

Later Sandeep Marwah honored and presented Life Membership of International Film And Television Club of AAFT to the dignities from Hungary.

Portrait of Sandeep Marwah Was Attraction In Polish Exhibition 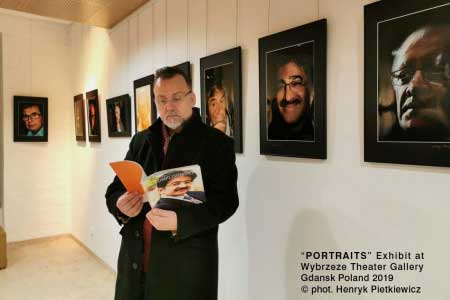