New Delhi: A new edition of well-established Life Style Magazine, under the name and banner of Talaash, was released by Sandeep Marwah President of Marwah Studios at a grand function at Bikaner House open theatre.

“It is very important to be over cautious while publishing a magazine in this environment when every thing is available on Internet. You have to be exclusive and different from rest of the World of entertainment. I congratulate the editor and publisher for having courage and to maintain exclusivity,” said Sandeep Marwah thanking promoters for inviting him for the good purpose.

A colorful article on Sandeep Marwah was also this time part of the magazine. The release was followed by felicitation ceremony, a fashion show by Rosy Ahluwalia and dances by group from North East of India.

Thu Dec 12 , 2019
New Delhi; The26th Annual Alumni Meet has been announced on 21st December at the AAFT premises at Marwah Studios Film City Noida informed Haripriya Director Events. “This is going to be the 26th Annual meet. AAFT started in 1993 when only 40 students were enrolled in four courses and the first alumni […] 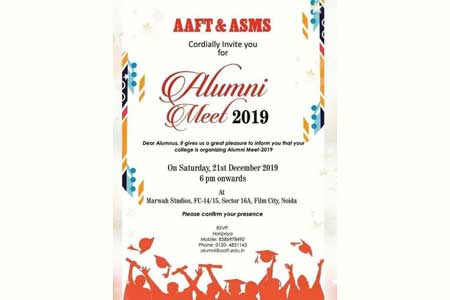