“I am thankful to Dr. Pranab Mukherjee for inviting me here. I am pleased to inform His Excellency about the Youth of our country specially scouts and Guides. Dr. Mukherjee as President of India was the Patron in Chief of Scouts and Guides Organization in India,” said Dr. Sandeep Marwah also Chancellor of AAFT University.

This is for the first time Chief Scout For India tittle has been given to an educationist and an art and culture promoter. This designation has always been with the Vice President of India.

Dr. Sandeep Marwah has been in films, television and media for 40 years. Five times Doctorate, Seven times World Record holder, recipient of seven hundred awards, interacting with 145 countries of the World, associated with five thousand events, teacher to twenty thousand media professionals and chairing hundred national and international organizations, Marwah has been a well recognized name in the media industry.

Tue Nov 26 , 2019
Noida: A grand function was organized to release the first book on Sandeep Marwah under the title ‘A Walk In The Corridor of Eternity’ written by a young writer Shreeya Katyal on the third day of 12th Global Film Festival Noida 2019 at Noida Film City. “I extend my heartiest congratulations […] 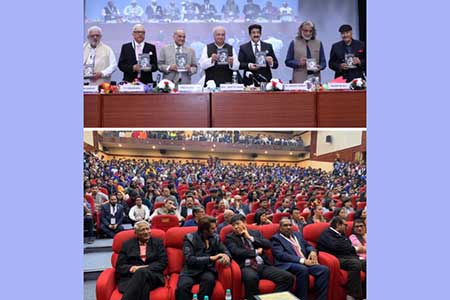