New Delhi: India is observing the 144th birth anniversary of Sardar Vallabhbhai Patel, who played a major role in the country’s struggle for independence and subsequently guided its integration into a united, independent nation.

“This is a message from New Delhi the capita; of India to the every citizen of the nation to observe and believe in National Unity Day Rashtriya Ekta Diwas, 31st October, the Birth Anniversary of Late First Deputy Prime Minister of India and Home Minister of India Sardar Vallabhbhai Patel,” said Dr. Sandeep Marwah Chief Scout For India addressing to the nation.

“Young men and women are to build-up a strong character. A nation’s greatness is reflected in the character of her people. It is tainted by selfishness, such a people can not prosper or achieve great things,” said Dr. Marwah repeating the words of Sardar Patel.

“Manpower without unity is not strength unless it is harmonized and united properly, then it becomes a spiritual power, Sardar Vallabhbhai Patel had said. The negligence of a few could easily send a ship to the bottom, but if it has the wholehearted co-operation of all on board it can be safely brought to part. Said Dr. Marwah.

Sandeep Marwah has been the proud product of Sardar Patel Vidyalaya, Lodi Estate and has been the brilliant student of the school. He has been the most popular student as he was heading most of the cultural organizations of the school even at that time,. He was also head of the Scouts in School and later Sargent Major in NCC. The Indian values and teachings of Sardar Patel has been inculcate in the system for all those years of school learning. 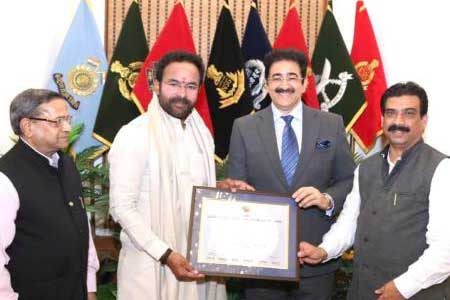