“I am thankful to the Government for nominating me to the most important designation as Chief Scout For India and give me another opportunity to serve my nation through this department,” said Dr. Sandeep Marwah.

“I congratulate you and I am sure that dynamic people like you are the real support in the progress of nation. I wish you all the best in your all projects,” said G.K. Reddy Minister of State Ministry of Home Affairs Government of India.

Wed Nov 6 , 2019
Noida: Dr. Sandeep Marwah President of Marwah Studios presented and honored Oksana Torbych of Ukraine with life membership of International Women’s Film Forum on her visit to AAFT during her tour to India. “We are proud to present this membership to Oksana and ask her to support us in the […] 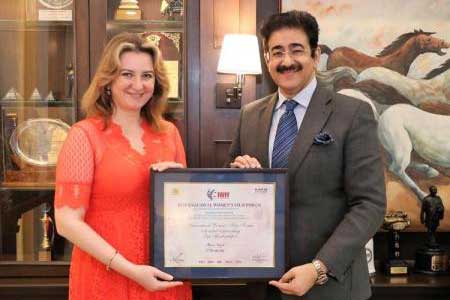