New Delhi: The Chief Scout For India Dr. Sandeep Marwah addressed the Nation on 2nd October, the 150th Birth Anniversary of The Father of The Nation Late Mohandas Karamchand Gandhi.

“We Indians feel proud to be part of the same country where Mahatma Gandhi was born. Mahatma Gandhi had his own ideology and he had spoken on every subject possible that used to touch the common man of this country,” said Dr. Sandeep Marwah while talking to the Scouts and Guides of this Nation.

“The purpose of the Scout Movement is “to contribute to the development of young people in achieving their full physical, intellectual, social and spiritual potentials as individuals, as responsible citizens and as members of their local, national and international communities”. Added Dr. Marwah.

“This statement of the purpose emphasizes the educational character of the Movement which aims at the total development of a person’s capabilities. One of the basic principles of education is that the dimensions of the human being – namely the physical, intellectual, social and spiritual – cannot be developed in isolation from each other. The process of a person’s development is, by definition, an integrated one,” expressed Marwah.

“It should be noted that the statement of the purpose of the Scout Movement emphasizes the fact that Scouting is but one of several factors which contribute to the development of young people. Scouting therefore is not meant to replace family, school, religious and other social institutions; it is conceived to complement that educational impact of these institutions and it is close to what Mahatma Gandhi always emphasis,” said Dr. Sandeep.

“It is also important to point out that the concept of responsible citizenship, which is one of the fundamental goals of Scouting, must be understood in a broad context. Thus, a person is, first and foremost, an individual. This individual is integrated into his community, which is part of a wider political structure (district, province, state, canton, etc.) the total expression of which is the sovereign state, or country. The latter is, in turn, a member of the international community. A responsible citizen must be aware of his rights and obligations in relation to the various communities to which he belongs,” said Dr. Sandeep Marwah thanking young media persons at Marwah Studios, film city Noida.

Sandeep Marwah at Kochi In Kerala to Study Tourism

Fri Oct 11 , 2019
Kochi: The Managing Director of National Federation of Tourism And Transport Cooperatives of India Limited Dr. Sandeep Marwah reached Kochi to study the prospects of tourism in the city. Kochi-Cochin is called the “Queen of the Arabian Sea”, Kochi was an important spice-trading centre on the west coast of India […] 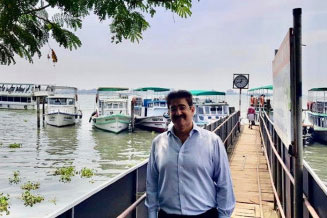