Noida: A colorful cultural evening was organized by ICMEI- International Chamber of Media And Entertainment Industry in association with High Commission of Malaysia in India at Marwah Studios, Film City Noida.

“I have not thanked enough for the hospitality, love and affection I got on my visit to Malaysia early this month, We are again enjoying the traditional dances and music from Malaysia at our own campus,” said Dr. Sandeep Marwah President of ICMEI and Indo Malaysian Film And Cultural Forum addressing the houseful auditorium at Marwah Studios.

“We are thankful to Dr. Marwah and his team along with the cultural group from the State of Sarawak. This is in continuation to celebrate the Malaysia’s Independence Day which falls on 31 August, also known as Merdeka Day. Indo Malaysian Film And Cultural Forum in a short span of time proved its powerful existence. We welcome you all to Malaysia, the real center for tourism,” said H.E. Dato’ Hidayat Abdul Hamid High Commissioner of Malaysia to India.

Tue Oct 1 , 2019
New Delhi: A national level program was organized by Veerta- a social organization in association with GCTC to motivate students from all over India at Deputy Speakers Hall at Constitution Club. Speaking on the occasion Dr. Sandeep Marwah Chief Scout For India said that we need to change our thinking […] 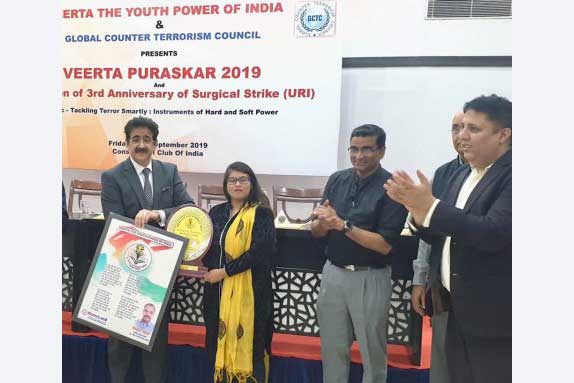