London: The Chief Scout For India Sandeep Marwah was the special invitee at Indian High Commission to be the part of 150th Birth Anniversary Celebration of Mahatma Gandhi.

“The name of Mahatma Gandhi is known to roadside worker to Managing Director of a multi national company and can be seen from schoolbooks to currency notes. His teachings are valid till today. He is remembered all over the World for Non Violence,” said Sandeep Marwah Chief Scout For India.

“There are few principles of Scouts and Guides organization and they have been derived from Mahatma Gandhi’s teachings like-Integrity – We act with integrity; we are honest, trustworthy and loyal; Respect – We have self-respect and respect for others; Care – We support others and take care of the world in which we live; Belief – We explore our faiths, beliefs and attitudes; Cooperation – We make a positive difference; we cooperate with others and make friends,” added Sandeep Marwah CSI.

The event was designed by ‘The Confluence’ in association with ICMEI- International Chamber of Media And Entertainment Industry supported by Mahatma Gandhi Forum of AAFT University and WPDRF- World Peace Development And Research.

AAFT School of Fashion And Design Marked Presence In London

Tue Oct 1 , 2019
London: AAFT School of Fashion And Design stole the lime light at the fashion extravaganza organized on the third day of Bharat Conclave by Confluence- Unification of Skills, Talents and Leadership on the occasion of 150 years celebration of Mahatma Gandhi at Hotel Copthorne Tara Kensigton at London, UK. The […] 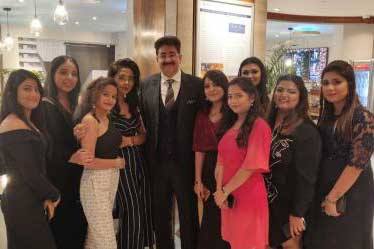