London: AAFT School of Fashion And Design stole the lime light at the fashion extravaganza organized on the third day of Bharat Conclave by Confluence- Unification of Skills, Talents and Leadership on the occasion of 150 years celebration of Mahatma Gandhi at Hotel Copthorne Tara Kensigton at London, UK.

The event was inaugurated by the first lady of Maharashtra Amruta Fadnavis wife of Chief Minister of Maharashtra Devendra Fadnavis along with beauty of Indian Cinema Karishma Kapoor, popular Indian film star Sanjay Kapoor, Designer Reena Marwah, Sandeep Marwah President Marwah Studios and Smita Srivastava of Confluence in the presence of jam-packed hall of the hotel.

The nine designers of AAFT were representing the style and collection especially designed for the occasion under the guidance of Director Ritu Lal. The audience was astonished to see the well-prepared collection of young designers who were also part of Prime Minister Narendra Modi’s Campaign Make In India – Khadi India and New India.

“My collection is not just looking for pretty clothes but a soul or a story in which they wear a strong Indian identity, aesthetics & a conscience & hence Gandhi,” said Dipti Tripathi. “Fashion is not simply a matter of clothing, fashion is air born upon the wind, one intuits it, so is khadi there is nothing that can beat the feel of Indian hand spun fabrics,” added Yukti Gupta.

“This colorful collection are made up of eco friendly colors with draped saree Indian traditional look,” expressed Mayank Bharti. “My collection of back-to-basics, inspired from khadi & sustainable fashion, has been brought up to present Gandhi’s introduction to an Independent India,” said Pramarthi Sukhija.

“My inspiration was to showcase bright and saint India,” believed Phankhuri Agarwal. ”I had shown the British times the colors were taken from the Indian struggles,” mentioned Palak Singh “the idea was to show the sad and dull India at the time of freedom fights showing the change during that course,” considered Runita Malhotra.

“ “The collection that i have present is all about the positivity that was inspired from “The Scarab”. It is a distinctive mash-up of soft pastels, warm blush tones. Playing with the tones of pink in throughout the collection growing developing India,” said Itika Jain.

“My inspiration was positivity which was shown in terms of bright colours and flowers, Which Gandhi ji had thought for the independent India, The Collection shows the happy and green India,” said Shivi Agarwal.

Fri Oct 11 , 2019
London 29th Sept, 2019: Renowned media personality Dr. Sandeep Marwah Chief Scout For India was the special guest at the talk on Gandhi -The Father of The Nation, organized by Indian High Commission on the occasion of 150 year celebration of Mahatma Gandhi at 8Northumberland Avenue, previously the Victoria Hotel where […] 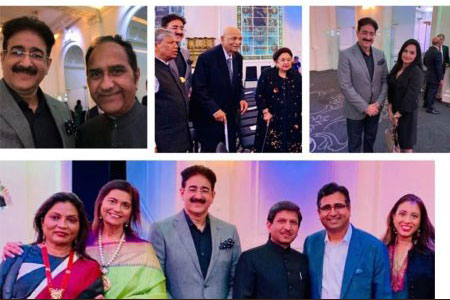