New Delhi: The biggest broadcasters of Ministry of Information and Broadcasting, Government of India All India Radio-Rainbow invited Dr. Sandeep Marwah President of Marwah Studios and Chancellor AAFT University of Media and Arts for a special show.

One-hour radio program Helpline at Rainbow Radio 102.6 broadcasted the show on careers in films, television and media conducted by Rajshree Trevedi a well-known Rj of the station.

“It was a great pleasure to be at All India Radio for such an interesting program with Rainbow. I was amazed by the facilities and up gradation of radio station since I was there last. The radio has become very popular all over India,” said Dr. Sandeep Marwah talking to the press outside the studio at Akashvani Bhawan.

Fri Sep 20 , 2019
New Delhi: “I extend my heartiest congratulations to H.E. Giovani Castillo Ambassador of Guatemala to India and the people of Republic of Guatemala on the National Day. I wish India and Guatemala a very strong and long lasting friendship,” said Dr. Sandeep Marwah Chair for Indo Guatemala Film And Cultural […] 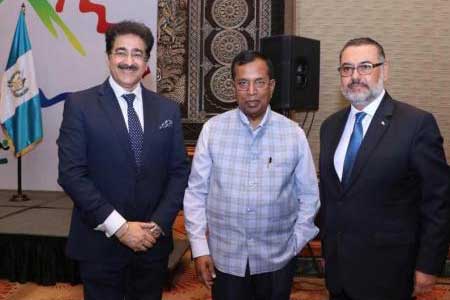