Moscow: Not very long a delegation from Russia visited Marwah Studios to attend a powerful event on Bricks and Dr. Sandeep Marwah that time nominated as the Chair of Indo Russian Film And Cultural Forum.

“The visit to Moscow was very interesting not only that I enjoyed the tourism part of the city but I had the opportunity also to learn about the city quite a lot,” said Dr. Sandeep Marwah President of Marwah Studios.

Sandeep Marwah informed that the delegates from Russia included Olympic Winner Tatyana Romanovna Lebedeva, Chairman of the Association of Public Associations, National Council of Youth and Children’s Association of Russia Gregory V. Petushkov and Roman Sergeyevich Chukov Chairperson of the Board at the Russian Centre for Promotion of International initiatives visited Marwah Studios.

St. Petersburg Is The Cultural Capital of Russia- Sandeep Marwah 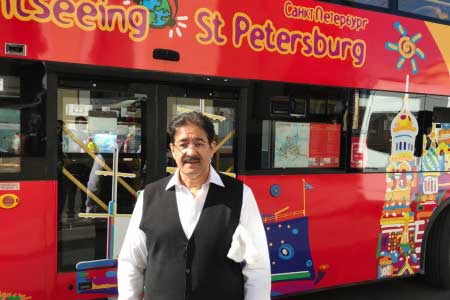